Yes, I have been presumptuous. To attempt to pastiche a writer of Mrs Gaskell's talent must surely be so. Plus aping the Victorian style of writing was always going to be a challenge.

Our communication, not only in speech but also the written word, has changed so drastically over the intervening hundred and fifty years. In comparison we speak in shorthand and the semi-colon, so beloved of Mrs G, has all but disappeared. There are sentences within North & South that are a paragraph long! (Don't panic – none in Unmapped Country are as taxing.)

A balance had to be struck between authenticity and a modern readership. So, I hope that devotees of the Victorian novel won't wince and that others find it accessible.

Other things to bear in mind: Linear story, no flash-backs, no time-slip – in fact no story-bending devices whatsoever. Forget the 'tell don't show' that is drummed into us aspiring writers by those that know better (lucky sods with 3-book publishing deal). The Victorian novel has minimum dialogue compared with modern books.

Then of course 'accent' was tricky. It was all very well for Mrs G – she lived in Manchester – but a mere southern softee was going to struggle. So I apologise to Mancunians and ask them to bear in mind that unintelligible dialect can be very aggravating to read so I have kept it to the minimum. And after all, neither the delicious Richard nor Brendon Coyle are Lancashire lads! (If you don’t who they are – watch the BBC’s North & South DVD – you are soooo worth it)

My affection for Margaret Hale was surprising because I'm not usually drawn to righteous, overtly religious females. However, I did not find her constant self-questioning irritating and her honesty, coupled with her loyalty to both people and her own values, won me totally. I was happy to be her friend. Clever Mrs G!

John Thornton, however, captivated me completely. I know I am far from alone here. A queue of adoring females must have started from the moment of publication. However, it was worrying to discover that I actually wanted to BE John Thornton. Being very much a woman (apart from the usual tomboy phase many decades ago), this ambition was distinctly disturbing. I can only rationalise it by recognising a desire to be a 'millocrat' in the adrenaline-charged mid 1800s. To be a mover and shaker when Manchester was inventing itself; when this revolution made anything possible; when men of vision could change their world – before the age of the specialist. Obviously Thornton's inner turmoil; his struggle to cope with the baggage of his past; the dichotomy between his innate fairness and the accepted cruelty of the times, made being him even more appealing.

“There is a great deal of unmapped country within us which would have to be taken into account in an explanation of our gusts and storms.”
Excerpt from Daniel Deronda by George Eliot

Unmapped Country is a continuation of Mrs Elizabeth Gaskell’s much beloved novel North & South set in Milton (Manchester), the centre of the cotton boom of the mid Victorian era. Events continue to conspire to make motives misunderstood; friendships are formed; preconceived concepts tumble and those tantalising moments of near reconciliation are all there, amidst the original characters and some new faces. However, I have cheated because I have ditched the original ending – but read on and I think you will agree that I was justified . . .

I read North & South during my school years but it was more recently that it ambushed me. The excellent BBC adaptation over four episodes put the tin lid on it. We will gloss over Richard Armitage's brilliant portrayal of Thornton (otherwise we could be here for a very long time and it could get messy), and concentrate on Sandy Welch's fantastic script, Brian Percival's direction and Jill Tevellick's casting. All excelled. Irrespective of whether you have read the book – do watch it. As usual, it's hat's off to the Beeb and the DVD is dirt cheap on Amazon now.

I did have one beef – with both book and TV version – the ending. Both were rubbish. Now, I am not anticipating a bolt of lightening from Mrs G's place of residence, as she didn't like her ending either. As for the Beeb's – well – as if! I exonerate all involved as it was obviously a sop to overseas sales. The fact that it was out of context, unnecessarily sentimental and required the viewer to take a massive leap of faith in coincidence, we will excuse as we know it was no doubt appreciated by our Yankee cousins.

Initially the story was serialised in Charles Dickens’ weekly magazine, Household Words. Blissfully unaware that her contract was drawing to a close, Mrs G was rather taken aback by the reminder that there were only two episodes in which to wrap it up and she was far from satisfied with her rushed conclusion.

Her publishers subsequently produced the manuscript in book form and for this she attempted a rewrite but, reading between the lines, I think she was heartily sick of the story by then and in fact referred to it as 'that wretched book'. The result is a complete anti-climax. Do read Jenny Uglow's fab biography for more detail. www.jennyuglow.com

Presumptuous? - undoubtedly, but I wanted a different ending and, what's more – I wanted MORE. So I worked backwards through the last few chapters and found the place where I considered the story was still strong and from whence it could progress. So, if you are still in love with John & Margaret, or you are intrigued by their enduring appeal - read on! 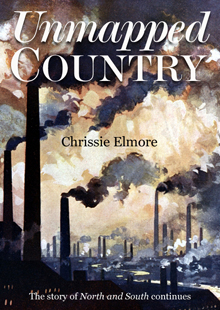 'The fact that Chrissie Elmore manages to capture the language and tension of Gaskell's original makes this book a must read.'

'Many new lovable characters . . . hard to put it down and it's really enjoyable, staying true to the original characters.'

'This is one of the best continuation stories I have read: beautifully written and very engaging.'

'I was gripped from the off and it was a struggle to put it down at night. . . proving once again you can write a strong and powerful love story without resorting to the bedroom.'

'I couldn't put it down and was delighted to find that it could stand alone. It's rare to find a `page-turner' which is also literary.'

'I particularly enjoyed the attention to detail, which renders the descriptive passages very vivid. Evidently, the author has done her research well to stay true to the historical setting of the story.'

'I believe Mrs Gaskell would be proud of this book. To me everything about it was perfect and I wouldn't change a thing.'

'. . avoids most of the pitfalls modern writers penning sequels to 19th century works seem to fall into.'